The Cost of Missed GP Appointments For The NHS

Which areas in the UK have the most missed GP appointments, and how much does it cost the NHS?

Which areas in the UK have the most missed GP appointments, and how much does it cost the NHS?

The NHS was put under enormous strain during the pandemic. Even now that life in the UK is somewhat returning to normality, the effects of COVID-19 are set to have an impact on our healthcare services for years to come due to the backlog of delays.

Members of the public have started to realise, more so than ever, how important it is to do their bit to keep our NHS functioning at its best and not waste funds or resources. One thing that everyone can do to avoid wasting NHS funds is to ensure that they attend their GP appointment when booked in, or cancel ahead of time if they cannot attend.

Each missed GP appointment costs the NHS an average of £30 per person (Source: NHS).

Through analysing NHS data, we have been able to rank the areas in the UK which have the highest proportion of missed GP appointments, and which locations have cost the NHS the most money as a result.

Stoke-on-Trent came out as the area with the highest percentage of missed appointments in the country, with over 7% of all appointments unattended in the past year. As a result, this has cost the local NHS an estimated £2,935,020 per year – the equivalent annual salary of 73 additional doctors or 144 nurses.

The top 10 areas in the UK with the highest proportion of missed GP appointments are:

Six out of the top 10 worst areas are based in Greater Manchester, with Manchester and Bury landing in second and third place respectively; each with over 6% of all GP appointments going unattended.

Other North-Western areas within the top 10 include Trafford, Salford, Tameside and Glossop and Bolton. These six areas in Greater Manchester collectively have cost the NHS over 24 MILLION pounds in the past year.

Whilst Stoke-on-Trent has the highest ratio of missed GP appointments out of all the areas surveyed, North East London actually has the highest cost to its local NHS trust as a result of missed general practice appointments. This area’s appointments bill stacks up to an enormous £16,927,260 a year, the equivalent of the yearly salaries of 420 doctors, 420 nurses or 833 healthcare assistants.

Collectively across the UK, £391,868,370 of NHS funds has been wasted due to people not attending their GP slots.

We have released this research in order to raise awareness of the effects of missing your GP appointment, or not calling to cancel, which many members of the public may not be aware of.

In order to do our bit to support the NHS, we recommend adhering to your local surgery’s cancellation policy to ensure that, if you are unable to make an appointment, other patients can be seen and GP time is not wasted.

Which areas in the UK have had the most missed appointments and how much does this cost the NHS? 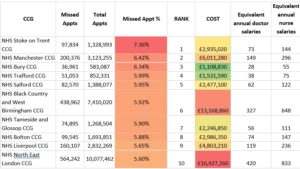 The data was collected using an official NHS report covering missed appointments data up until February 2022. The total cost to the NHS was calculated by multiplying the raw number of missed appointments by the NHS-released figure that each missed GP appointment costs the NHS which is an average of £30 (Source: NHS).

The raw missed appointments data was taken from this NHS review report:
https://digital.nhs.uk/data-and-information/publications/statistical/appointments-in-general-practice/february-2022