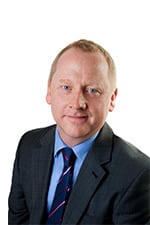 Adrian joined us in December 2011 as Head of Serious Injury, leading the department through a period of significant growth, whilst working with customers following catastrophic and life changing events.

In his time at Fletchers, Adrian has seen the serious department grow significantly. Not only has it won many major cases under his tenure but also some major awards too, one example being Outstanding Case of the Year at the Personal Injury Awards in 2012. Adrian has recently been named as one of the Top 10 Leading Individuals in the North West for Personal Injury by the Legal 500 for the second consecutive year, and was described as ‘brilliant for spinal injury work and an established heavyweight in the claimant personal injury world’.

In spring 2017, Adrian was appointed our Chief Legal Officer and oversees all of our legal teams, ensuring our customers are always at the heart of everything we do.

Adrian has recently been named one of the Top 10 Leading Individuals in the North West for Personal Injury by the Legal 500 for the second year running. He was described as being ‘a real leading light in high value personal injury litigation.’

NHS Report calls for a ‘just and learning culture’

Our Industry Awards and Accreditations